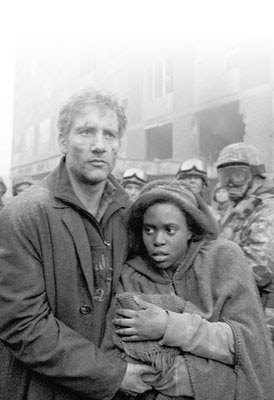 Maybe I've just been unlucky. Maybe I haven't seen the best of the city. Maybe, though, there's a reason that movies like Children of Men and 28 Days have been set there.
London has that gloomy, post-apocalyptic feel that envelops you as soon as you enter the half-outside, half-inside automated netherworld that is the shuttle taking you from Gatwick's North terminal to its South terminal. It was there again as I spent arrived for a writing course last week.
Stepping into the Underground (an ominous name itself), you hear cool, clinical automated voices telling you to "Mind the Gap" ad nauseum, and buses have those creepy security screens in full view of all passengers that seem to presage a mugging. Work being done on the rails or the odd strike is also a very common occurence, so your travels can get bogged down in a hurry.
The city EATS money as well, in the manner of shoebox-sized hotel rooms for 120 pounds/night, shuttles (the Gatwick Express expressly makes your wallet lighter for 17 pounds for a one-way train ticket into the city), and an added 17 pounds for 24 hrs of wireless access at the hotel.
Yes, it has its charms - a huge selection of great restaurants and takeaway spots, mostly very friendly people, a royal family to easily make fun of, and neighborhoods like Notting Hill.
But you can feel the unspoken class warfare as well, and the gulf between the 'avs and the 'avnots is easily visible in the form of numerous private clubs, high-end cars, and the barely concealed contempt in so many hotel staffers' eyes.
Perhaps, as I say, I have just been unlucky on my four visits there, with a total of 3 hours of sunshine. Maybe I need a better spot to stay and more insider knowledge. Or buckets of money. Or, maybe Clive Owen and all those zombies were angry for a reason.
Posted by Jeff at 11:58 AM