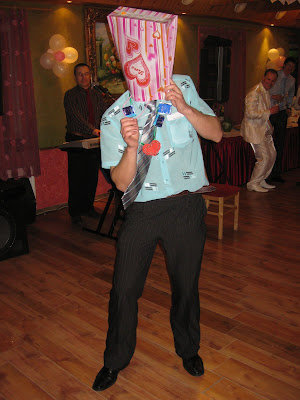 You've probably woken up many days thinking "I wonder what a Lithuanian wedding is like?"
Well folks, I have your answer. It should be noted that there were several aspects of the wedding I attended last weekend in Siauliai (pronounced "shao-lay") that met with the strict standards of the International Matrimonial Norms, Elements and Regulations Dictates (IMaNERD):
With these all met easily, the wedding did have some interesting customs that I was unaccustomed to:
Overall, it was a very nice time, with great hospitality provided to this obvious foreigner. And now you finally know what a Lithuanian wedding is like. 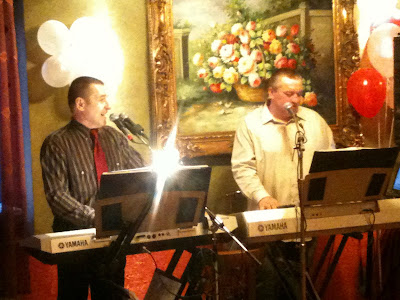 The evening's entertainment. A non-stop odyssey of Lithuanian old-school. 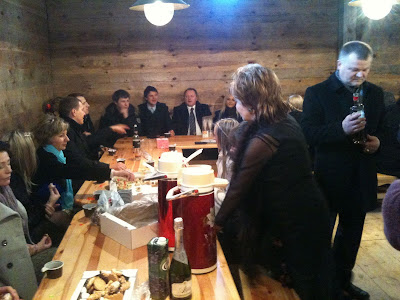 The wait at a ranchhouse while photos and sleigh rides were held outside. Treats included brandy, vodka, champagne, and pastries. 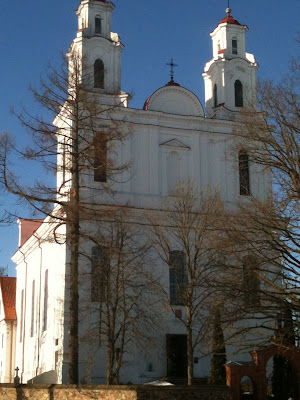 This is not the church where the ceremony was held, but the place where photos were taken in-between ceremony and reception. 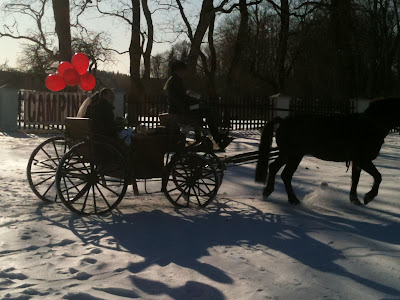 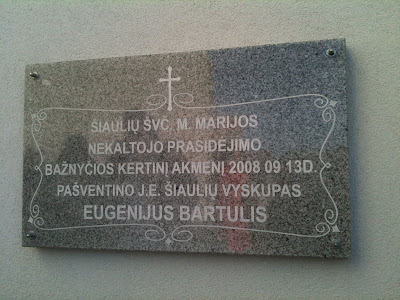 The church where the ceremony was held. In English, "The Church of St. We No Pay the Heating Bills" 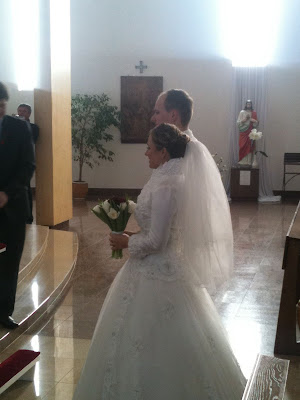 Bride and Groom. We could honestly see his breath when he said "I do" ("Taip", or Yes) 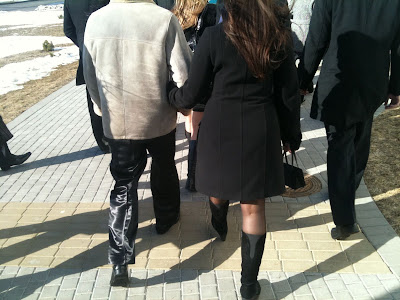 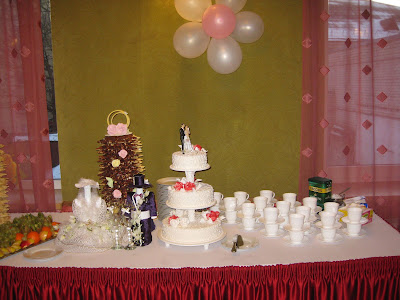 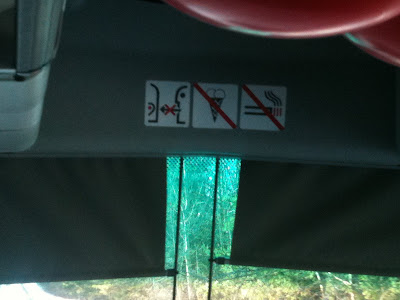 The rented bus had strict rules, including a rather random "no ice cream cones" policy 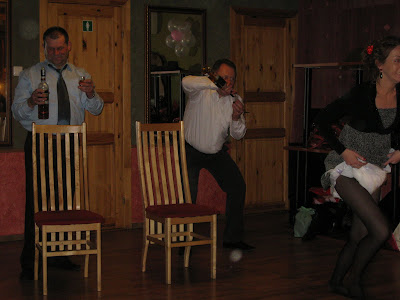 You're thinking "Is that woman wearing a makeshift diaper and running away from a man menacingly pouring vodka?" Yes. That's exactly what it is.
Posted by Jeff at 1:03 PM 13 comments 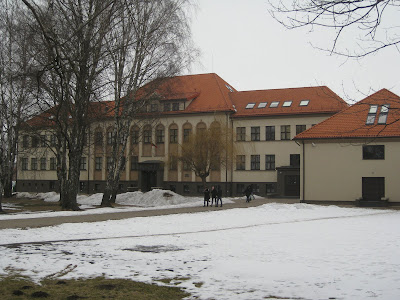 This past weekend took me to Lithuania, for a wedding and a meeting of the in-laws. I would suggest there's no better way to get completely immersed in a culture than heading to a wedding where 49 out of the 50 people in attendance are from that very country.
Lithuania, for the uninitiated, is often lumped in with Estonia and Latvia in regular conversation. A small country of some 3.5 million, it takes roughly six hours by car to get from one end to another.
The country, like so many above a certain latitude, shows its best side in summer, and its grossest in early spring, where the snow needs a wash and trees need leaves.
In that same vein, there were at least a dozen times where I could easily have been driving through Lacombe, Carp, Albany, or any one of a thousand other North American small towns and countrysides.
I didn't make it to Vilnius, the capital, but instead hung out in Silute ("Shi-loo-tay"), a town of about 25,000 people. It showed a few marks of a run-down working-class ex-communist ruled spot, but otherwise it was also similar to any small city.
The entertainment media had some interesting stuff going for it. The language is a complex one, sounding (to me anyhow) as though Italian and Russian languages had a baby. Words have different endings based on their subject; I was able to read the latest on Ludacrisu, Rihannus, and of course Lady Gagos. Some impossibly bad soap operas and an all-day American Idol-type station were on the tube. It was here that I learned Bon Jovi's "It's My Life" sounds even worse in Lithuanian than in English.
More observations next post, from My Big Fattening Lithuanian Wedding (not mine, actually). For now, some photos... 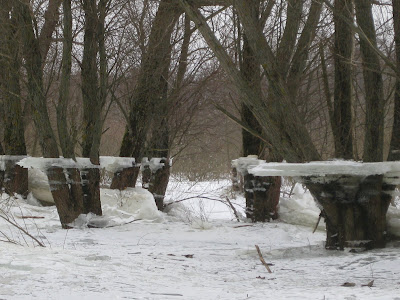 Parts of Lithuania's countryside in the Western part often sees floods in winter and spring, leaving behind this cool-looking ice ring on a lot of trees. 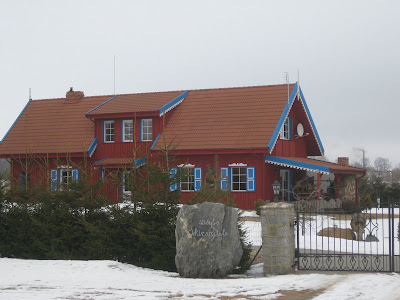 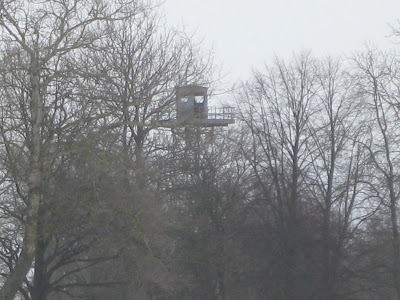 This is a Russian guard tower. Just outside Silute, in a town called Rusne, you can walk across about 100m of ice (or swim it in the summertime) and be in Russia. The dudeski in the tower will have some questions for you though (no joke). 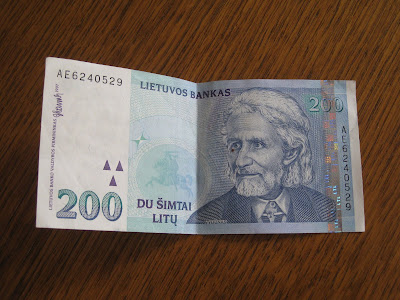 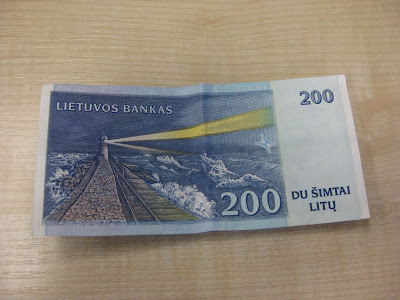 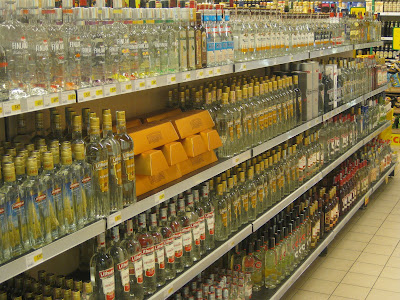