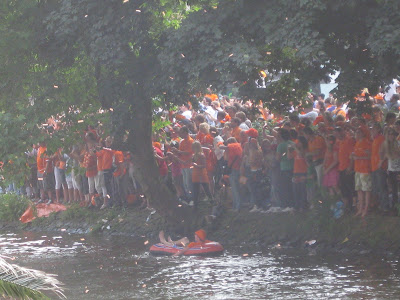 Nike's last Write the Future spots here say: Als je alles geeft, verlees je niet. (If you give it everything, you don't lose). It's pretty safe to say people here gave everything, and then some.
I'm sorry I lied in my previous post - the party was apparently not over.
Organizers decided to go ahead with the full celebrations to welcome home the Dutch World Cup team on Tuesday, with a 2-hour canal parade and a big celebration at Museumplein.
Depending on what you read, anywhere from 500,000 to 1 million people filled the streets and canals to say thank you for a thrilling four weeks to Bert and his boys.
The result was really all things Amsterdam - alternately chaotic, cheesy, charming, cool, crazy, and canal-filled. And confusing (we did lose, right?).
From the impossibly schmaltzy Guus Meeuwis - whose melancholic traditional songs are popular with millions of Hollanders but make some of us want to make a van Gogh of it and cut off our ears - to world-class DJ Armin van Buuren, it was a massive love-in, sing-along and dance party. The players were visibly moved. The refrain most often heard from them and from commentators was "Can you imagine if we had actually won?"
I caught part of it all live on a break from a TED conference (more on that in a subsequent post). Was it a little odd to be hearing "We Are the Champions" all over town when we were, er, not? Yes. But the overall spirit and outpouring of appreciation was enough to muzzle pretty much anyone's inner cynic.
Check out the full 4+ hours here. It does a far better job of capturing the images than the few photos I managed. I've outlined a few key timestamps below, but it's worth clicking on random spots as well. Another amazing day.
02:32:55 - pre-canals
02:40:00 - the canals
03:42:40 - intro to the players
04:00:00 - players get down
04:03:20 - amazing panoramas of the scene and the city
04:06:00 - Wesley Sneijder serving beers (let's see LeBron do that) + panoramas of the city
04:11:25 - a good minute-and-a-half montage of the entire day 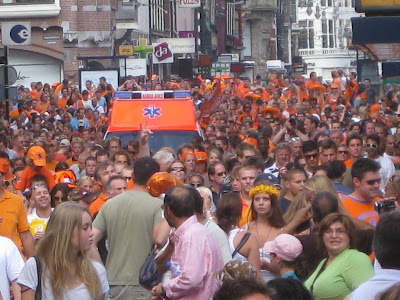 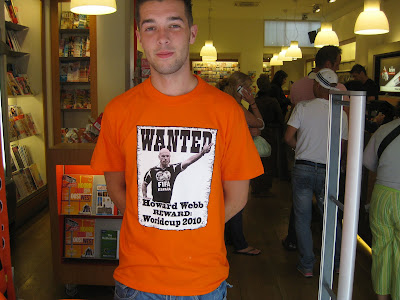 Fans buying these obviously missed the first half where the Dutch could have gotten 2 reds
Posted by Jeff at 10:06 AM 0 comments 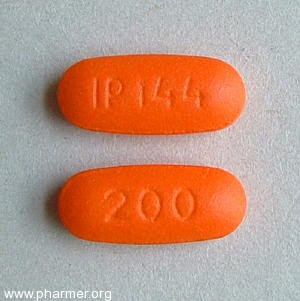 The party is over. At least for today.
The collective mood in the hours leading up to the World Cup final on Sunday, July 11 2010 was so upbeat, so crackling with positive energy that it didn't seem possible that Holland could lose.
The streets and parks and bars were jammed, smiles everywhere, orange even more everywhere (sorry - my English also has a hangover).
Impromptu conga lines, the most amazing outfits ever conceived, and after a brief ominous grey lull, a sunny and clear late afternoon and evening - all this meant that some 2+ hours prior to kickoff, I already felt that I had experienced one of the greatest days of my life.
The day moved from cycling and soaking up the scene to meeting friends and witnessing Leidseplein's happy madness, moving through and boogying with the masses at Museumplein (singing K'naan's World Cup anthem with 100,000 = pretty awesome), and then settling in with friends at a packed neighbourhood pub for the game.
It all made the ending somewhat more bearable, really. It was like filling up the gas tank with so much enjoyment that there was still some left after it all. The loss was less crushing than it was deflating, numbing, like the air coming out of a big orange balloon.
And as much as people were hoping to share an all-inclusive party, there's some comfort in sharing a common sadness too.
Game notes:
Everyone was primed for a party - and wow can the Dutch party. And they don't stay down for long - biking home through a peaceful Vondelpark after midnight, I came across a group of about 25 Oranje fans holding an impromptu dance party right there on the pathway.
You can feel the country's sadness today, and my heart goes out to lifelong Nederlanders and the players who did the country very proud.
But with a terrorist bomb killing over 70 people watching the same match in Uganda, perspective (and a reminder as to how lucky we are) is sadly always close at hand. 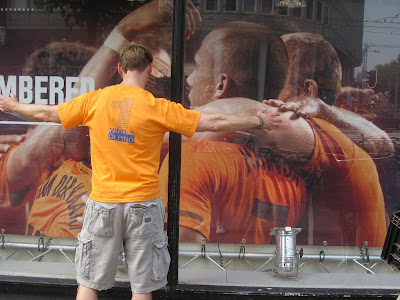 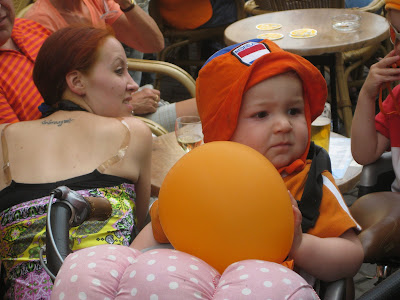 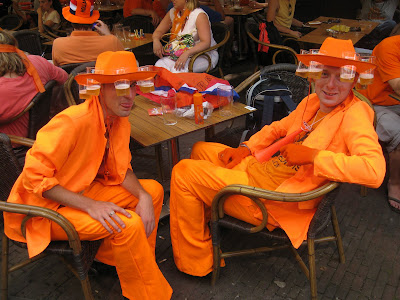 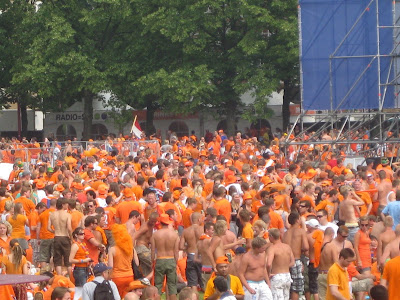 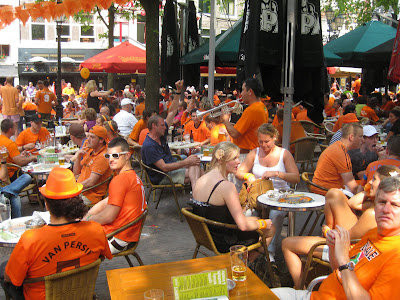 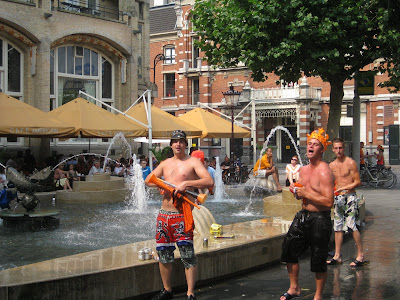 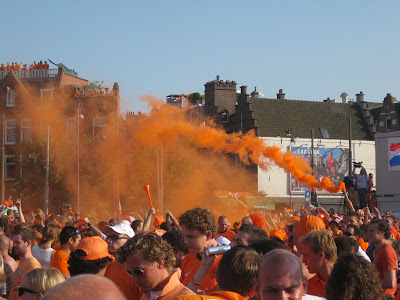 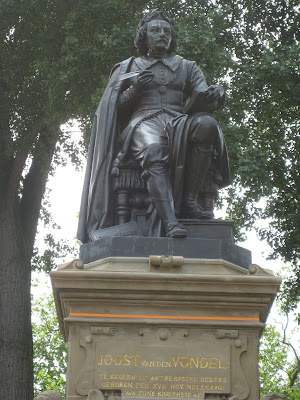 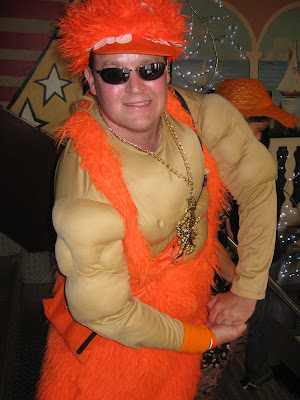 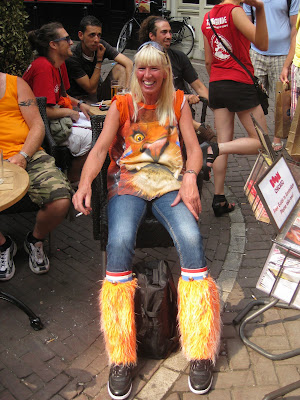 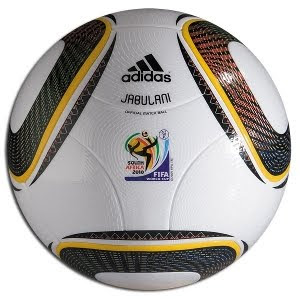 The goosebumps have started early. Some 8 hours remain until kickoff.
Officials are expecting over 100, 000 on Museumplein tonight, and the masses are gathering already. The temperature is a deliciously muggy and sunny 28.
Tuesday, win or lose, there will be a massive celebration honouring the team. Win - and there's a long parade through the canals of Holland's capital city, culminating in a celebration on Museumplein; Lose - and the parade is not happening, but the celebration on the 'plein will go ahead as planned to welcome the team back.
This is a once-in-a-generation event - it's been 32 years since Holland last appeared in a World Cup final, and it could well be another 32 years until they do so again. Think of the odds: 180+ countries start the quest for the Cup every few years, and only 2 make the final.
Game-wise, it's a match-up of styles, somewhat similar in terms of ball control, somewhat different by virtue of upbringing - the Spanish, more emotional, fiery, dynamic; the Dutch, more stoic, measured, though no less passionate about the game.
My prediction? Dutch squads, long guilty of over-confidence (and losers as a result), have found the perfect opponent. Spain is so good, so deep, that you simply can't get over-confident. They are a natural humility pill.
But the Netherlands wins it, 3-2. Coolness reigns over fire (although you'd better watch your head, van Persie). Dirk Kuyt nets two goals for the Dutch as the Spaniards focus all their efforts on stopping Sneijder and Robben.
I feel very fortunate to be here for the experience.
Hup Holland Hup!!
Posted by Jeff at 12:49 PM 0 comments