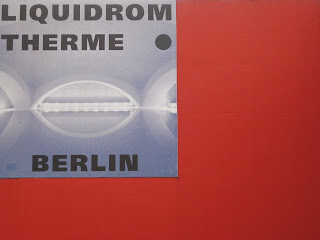 You down with FKK? Yeah you know moi!
FKK (pronounced eff-ka-ka) is Freikorperkultur - "Free body culture", and it is described by gridskipper.com as going as far back as the late 19th century. Though practitioners are "nude," they can't really be called nudists. There's a difference, at least in German culture, between FKK and simple nudism. FKK is more than going naked -- it's a practice that has broader philosophical goals. The FKKers are socially and ecologically minded, stripping down in natural environments. And, importantly, there's no eroticization of bodies in FKK.
It was with this daunting but noble premise in mind that I made my way to Liquidrom Berlin, on a rainy and cold afternoon that kiboshed my previous plans for a walking tour of the city. While it is not a "natural environment" at Liquidrom, the casualness and nakedness of the FKK mentality is at the core of the ease with which most German citizens get nekkid.
A German sauna dipped in accessible luxury, Liquidrom is a coed facility with 4-5 different sauna areas, an outdoor hot pool, a solarium with South Beach-like chairs, a bar and restaurant, and best of all a large domed indoor pool.
I arrived at the front desk, paid my 17.50 Euros for 2 hours, was handed my (gulp) black Speedos, and emerged five minutes later into the common area. I haven't worn a Speedo since about the age of 7, so I was slightly less comfortable than Paris Hilton at a spelling bee.
I strode (not at all confidently) to the bar and quickly asked where I could get one of the white robes that a number of the other patrons were wearing. Five Euros later and I was more at ease in my posh fleece, suddenly more Hef than Jeff.
I stayed in that comfortable zone for about a minute, when I was told that wearing swim trunks in the sauna was verboten. What's worse than wearing Speedos in a foreign country surrounded by flabby strangers? NOT wearing Speedos in a foreign country surrounded by flabby strangers.
But I quickly embraced my pioneering spirit, cast aside my prudish-by-comparison North American upbringing, shimmied out of my remaining shred of dignity and plunked myself down au naturel in a glass-front sauna, accompanied by two women and two men. We all sat (one girl was lying down) silently sweating away our inhibitions while I contemplated how alternately liberating and terrifying the experience was.
Overheated (no, not in that way - for every one attractive female figure, there were about 10 palate-cleansing bodies comprised of too much skin and hanging bits), I moved back into the Speedos and went into the aforementioned domed pool area (swim wear in the pools was mandatory).
The indoor pool dome is easily one of the coolest places I've been, with ambient/chillout music, dark alternating red/blue/clear lighting underwater, couples silently murmuring to each other and singles floating in their own contemplative worlds. Picture your favorite late-night lounge, except in water.

Indoor pool area
After a few trips back to the sauna and the pool, a (robed) spot at the bar for some water and a snack, and some interesting sights, I emerged back into the rainy cold a very relaxed new member of the FKK movement. I'm just not sure where to carry my card.
Posted by Jeff at 7:06 PM 4 comments