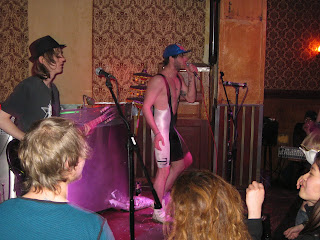 Berlin is the testicle of the West. When I want the West to scream, I squeeze on Berlin.
Nikita Khrushchev
While I can't exactly relate to this quote from a Cold War relic, I can suggest that what I did see on Friday night was indeed nuts.
How else to describe the music of a spandex-unitard-wearing, screaming, smiling lead singer and his trumpet-playing androgynous mascot wearing a creepy masquerade mask?
I ended up at Kaffee Burger, following the suggestion from the previous night's bartender at a great tapas place whose name escapes me (head to the Hackesher Markt area, and ask for tapas bar. And I would also recommend emphasizing the TAP part, so people don't think you are asking for a topless bar. Just sayin').
All was pretty chill when I walked in, with a DJ playing 80's music and a mixed crowd of 20/30-somethings all dressed down, maybe a little on the skater side. I settled in with a Berliner beer (maybe 2 Euros? cheap!), and watched as the dance floor and stage area quickly filled.
With little fanfare aside from the roar of a knowing crowd, two guys got on stage - one in the classic rocker garb of skinny-ish jeans and a t-shirt and shaggy hair, the other in a black t-shirt and not-so-classic spandex shorts and a Jesper Parnevik-style cap.
Flipping on a backing track with drums, they crashed right into a sort of speed-thrash-whatever style that got the crowd jumping in unison. Apologies for the lack of a description - my musical knowledge, while solid, hasn't reached this genre yet. (After the show I asked around and was told it can be called Dancepunk or Pop-punk). Either way, it was a million times better than Avril Lavigne, lest you be trying to draw comparisons. 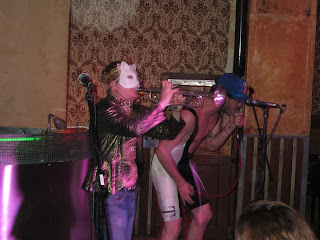 They played about 12 songs, each one a mix of really happy anger (if that makes any sense) and incomprehensible lyrics. And several trumpet solos by the masked she-male who seemed to jump up on stage at will and took turns getting fake-beat up by the guitarist and the lead singer.
Confused? Me too. The weirdest part is that it was entirely listenable.
Posted by Jeff at 3:23 PM 0 comments