Get to Know An Amsterdammer(s) 4 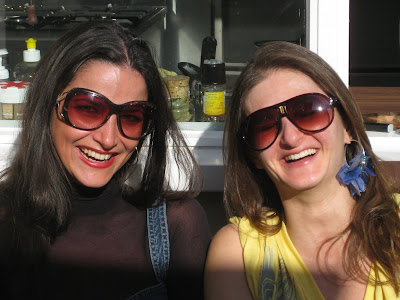 Amsterdam is one of the most densely-populated cities in Europe. With people living at such close quarters to each other, it helps to have good neighbours. It helps even more, one might suggest, if those neighbours are tango dancers.
Meet Vanessa (the neighbour, in yellow) and Christiane (the friend of the neighbour). Over a random afternoon chatting over and then climbing over the short brick wall separating our back patios, with prosecco, cheese, and grapes to fuel the discussion on a sun-dappled late March afternoon, we got to know some more Amsterdammers.
Both are indeed tango dancers, which in a Northern European city is about as common as being a gouda seller in Buenos Aires. Christiane has been here since 1993 while Vanessa was born here but spent the past seven years in Argentina.
Vanessa
Age: 29
Is: dating someone actually named Rembrandt
Likes about Amsterdam:
Dislikes about Amsterdam:
Oddest sight: some oiled-up guy in rollerblades and a g-string (Ed. note - sorry; I was feeling a little frisky that night).
Where else would you live in the world?
Buenos Aires
Life as a tango dancer/instructor can be hard here - it's not a passion of the Dutch, not a tango culture of course. And there is perhaps less, er, flexibility in their hips. Why does she keep doing it? "Because I love to dance".
----
Christiane
Age: 36
Is: originally from Brazil
Likes about Amsterdam:
Dislikes about Amsterdam:
Favourite spots:
Where else would you live in the world?
Madrid, Paris, numerous places in Italy
Christiane's challenges with being a tango dancer here mirror those of Vanessa. People don't immerse themselves here, they just dabble for fun and don't want to spend the money or the time to get into it. They want to have fun, and to really learn tango is not fun.
---
Having interesting neighbours just outside your back door, however, is quite fun.
Posted by Jeff at 5:36 AM 0 comments