As a follow-up (and a much more thorough piece) to the previous post regarding Amsterdam's interesting apartment life, have a look at this article. It explains the tenant protections very well, and also highlights why Amsterdam has avoided becoming Paris or London.

At one time or another, all residents of Amsterdam - especially expats - will have been involved in heated discussions about the seemingly impossible task of finding reasonable and affordable housing in the city. For some, the solution is to buy their own apartment, but at the housing market’s current inflated price levels, this option is open to fewer and fewer people. For students, short-term residents and those on average salaries, or below, there is only the rental market. As a member of Amsterdam city council’s Wijksteunpunt Wonen (District Housing Support Group), Guido Zijlstra advises tenants on a daily basis about their rights and entitlements. In this issue, he provides some invaluable guidelines to expats; the universal "suckers" of the rental market.

Expats often tend to compare rental prices in Amsterdam with those in their home countries. They consider a monthly rent of 800 euros, or more, for a two or three room apartment "reasonable" and are not aware that their Dutch neighbours probably pay no more than 300 euros. This is why all the housing rental agencies love expats so much: they are ignorant to the local laws and some of them think that those laws only apply to locals or to apartments that belong to the city council.

As a tenant in the Netherlands, you are protected by the law in several ways.

First of all, once you agree to rent an apartment (either verbally or through a written contract), this agreement can only be terminated by the tenant; not by the landlord, except in extreme circumstances (e.g. failure to pay the rent, in which case, the landlord must start a court case against the tenant). A contract that states "temporary" or "one-year lease" does not automatically end after the expiry date. A temporary contract is only allowed in very rare and specific situations. So if you think you have a temporary contract, you most likely don’t!

The second protection a tenant has is that the landlord cannot simply charge what he / she likes for an apartment. Every apartment has a maximum rent, which is calculated using a points system. Every square metre and all the facilities in the apartment score points and the total number of points equates to a certain maximum rent. Anyone can ask a Huurteam (viawww.wswonen.nl) to visit their apartment and perform the calculation at no cost.

If you pay more than the maximum rent according to this points system, you are entitled to have your rent reduced by the Huurcommissie (similar to a civil court that deals solely with housing rental cases/. It is very easy to start a re-evaluation process and the Huurteam can also help you with this, free of charge.

There is only one situation in which your rent cannot be reduced and that is if you pay more than 630 euros a month kale huur (flat rent) and you have paid that amount for more than six months. In such cases, the law considers that the protection it has offered for six months is not required. So, always start a process within the first six months of the contract. The exception to this rule is all-inclusive rents, for which you can start a process at any time.


Taking on the agencies

Many apartments that are rented out to expats are found via rental agencies. These agencies will try to make you pay as much as possible, because they normally receive one month’s rent as a fee. This is illegal. In May of this year, the highest civil court in the country decided that agencies must work in tenants’ interests. This means that if you pay too much and you have rented the apartment through an agency, you can start a process against the agency. One tenant who did this was awarded 15.000 euros in compensation by the courts. She was actually too late to lower the rent through the Huurcommissie(having lived there for more than six months), but she successfully sued the agency for not informing her about this law. The agency has to pay her the difference between the maximum rent permitted by law and the actual amount that she pays to the landlord, for as long as the contract lasts.

Many expats that I have spoken to consider using the system to get their rent reduced unfair to the landlord with whom they have signed a contract. This is ridiculous and they obviously do not understand the Dutch politics behind the legislation. Rental prices in the Netherlands are regulated precisely because the authorities do not want the inner city of Amsterdam and the surrounding neighbourhoods to be turned into yuppie zones, even more than they already have done, and so become more like London, Paris or New York. If the rental system had been liberalised, as the government proposed around two years ago, most locals would have already left areas like the Centre, De Pijp and the Oud-West, and the apartments would have been rented out solely to expats, who are willing to spend half, or more, of their income on rent. The Netherlands’ rental laws are intended to keep cities and their inhabitants diverse, lively, colourful and cosmopolitan. Surely these are exactly the reasons why most expats chose Amsterdam as their new home in the first place! So, consider your circumstances and, if possible, please do get your rent reduced. It is your duty as a resident and it makes perfect economical sense.


What tenants need to know 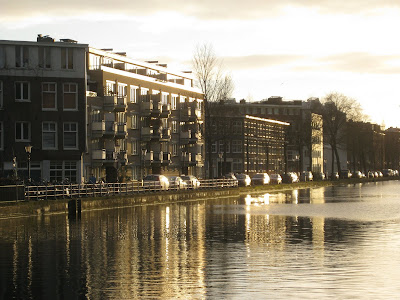 "Expats only", say many of the ads. And by "expats" they mean "suckers".
So goes the Amsterdam scam. Scamsterdam. Amsterscam. Ok, I'll stop - you get the idea.
For $2000/month (1250 Euros), you will be sitting in a 65-meter-square (210 feet) one-bedroom place in a relatively central part of the city.
Cost aside, the housing system is full of interesting pitfalls for the uninitiated, along with some perks too. Here's how it works:
There are more technical ins and outs, but that's it in a nutshell. Very different from the more capitalistic, less-Left-leaning West, with the only real similarity is that everyone is just playing by the rules of supply and demand. And Amsterdam, with its million things to do and laissez-faire lifestyle, is in demand.
The real tips?
Happy hunting!
Posted by Jeff at 12:01 AM 2 comments