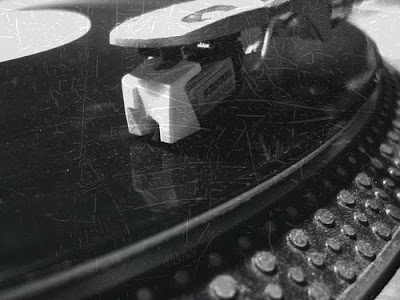 Cue the sound of a needle scratching the record, as a number of changes have brought the Lisbon adventure to a halt.
More details will be provided as the weeks progress, but for now I find myself in The Netherlands once again.
I looked forward to this moment for several weeks, to be both in the countryside and smaller towns, as well as in some of my favourite haunts in Amsterdam.
So an unofficial "Best Of Amsterdam" list is here. Each place will be visited again and again in the next few weeks to provide a much-needed sense of familiarity.
Cafe Festina Lente - a tiny corner pub that is always full of locals, either sitting facing the canal on a sunny day or sitting inside, in what feels like your favorite corner of an old library. Cheap drinks and good tapas-sized food.
Brood - a bread store right below Albert Cuyp street market; the brownies are amazing, the bread is amazing, and the apple crumble-type things are amazing. Amazing.
Albert Cuyp Market - a bustling street market, where underwear stalls sit next to fresh produce vendors and bike-supply hawkers. Well worth the 10-minute tram trip from Centraal Station to see and sample the foods, clothes and feel the neighboorhood vibe.
Utrechtstraat - a street a little off the tourist-beaten path but very close to the city center; great shops, coffee places, and restaurants.
Amstel River - perfect for an early-morning walk, with nice bridges to take pictures, see houseboats, and with a more open feeling than the many canals. Also good later in the day for...
...The Ysbreeker - a cafe/restaurant along the Amstel. It's nice indoors with huge ceiling; outside,on a good day,chairs and tables are set up in the grass overlooking the river.
Brouwerij t'IJ - the most awkward name you will have to pronounce (perhaps ever) - try Brow-er-eh tuh-eh - if you ask for directions, but a great, cheap, swarthy, drinking hole with lots of atmosphere and situated right under a windmill. Only open from 3pm-8pm though.
Vino di Pino - already mentioned in a previous post, this place bears mentioning again. People like Pino and places like this - great pizzas, cheap and tasty pasta, excellent specialty wines - don't exist in many place of the world anymore.
Posted by Jeff at 10:23 AM 1 comments 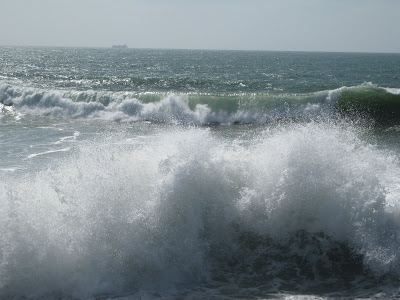 In another move to delay premature winterfication, last weekend was spent in Carcavelos, a spot just 30 minutes by train from Lisbon along the ocean.
Carcavelos is a popular surf beach for locals and tourists. I had been warned that much of it was overrun (similar to a few other places in the south of Portugal and Spain) by Brits and also German tourists and settlers. As such, I was prepared for the wurst.
But this particular weekend, thanks to some lingering stormy weather (soon vanquished by an awesome morning sun on Saturday), there seemed to be pretty well just Portuguese locals in the area.
A 3-hour beach and boardwalk stroll, filled with that salty spray that comes off the swells after the tail end of an ocean storm, was just what was needed as further storm clouds had arisen offshore (to be continued later in the week...).
But for now, a photo essay on Carcavelos. Here you can stay in an excellent 4-star hotel like the Riviera for some 70-90 Euros a night, depending on the season. I would add both the town and the hotel to your "must-visit" list when heading to Lisbon. 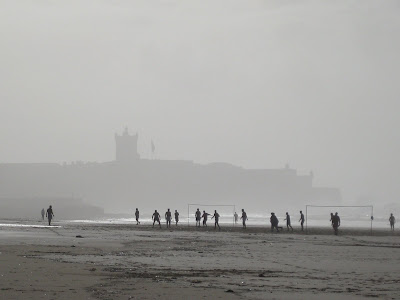 This was a group of mostly 50-plus (and over 60 in some cases) of local recreational footballers. They played at a pretty high skill level for at least 90 minutes in the morning sun. They took it very seriously, full of theatrical bellowing and admonitions. And I even saw a real-life soccer dive - as pathetic on the beach as it is on the pitch. 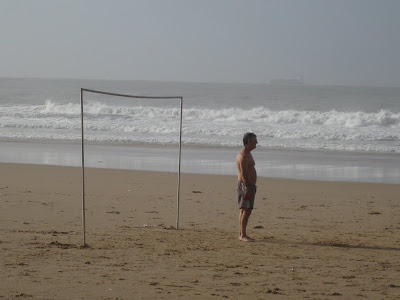 El 'keeper. One might have been tempted to suggest to the British tourists nearby that they should sign him for their next World Cup. One did not, however. 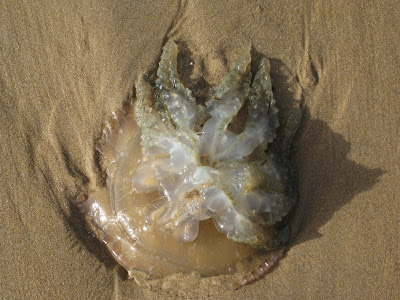 The storm from the previous day brought with it all kinds of stuff from the ocean depths. 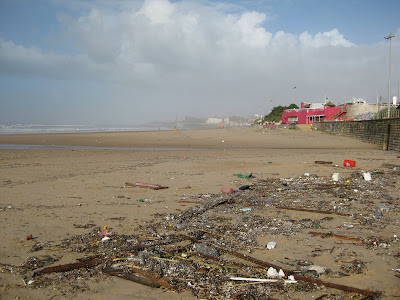 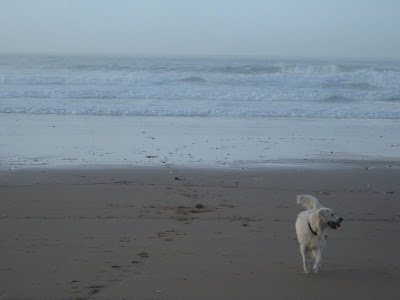 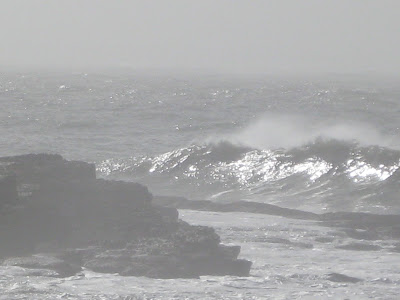 Not a lousy photo-taking job, only early-morning mist. 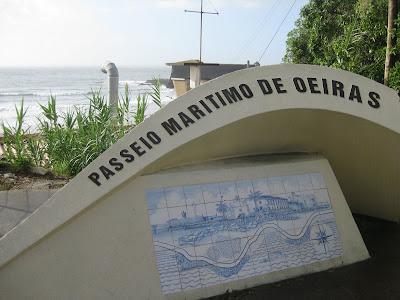 The walk takes you along the neighbouring town of Oeiras, with a large yacht club and oceanfront cafes and restaurants 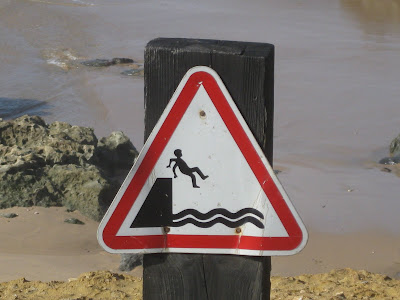 I think this is a "Danger: No Diving" sign but they kinda make it look like fun. 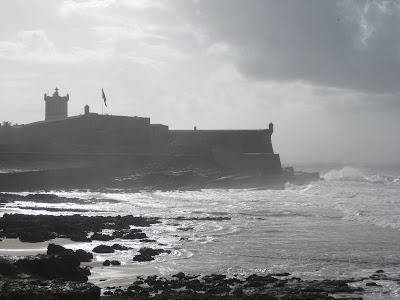 Forte de Sao Juliao da Barra - an old military fortification and home to various political prisoners in past centuries. Now apparently it's just a bad-ass summer home of the Minister of Defense.
Posted by Jeff at 7:30 AM 0 comments