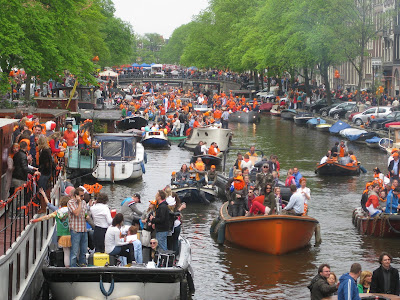 Whoa. Now THIS is a party.
Every part of my body hurts as I type this. Somehow I think I managed to pick up tuberculosis, athlete's foot and Ebola all within a few blocks. And I've never felt better.
I've never been to Mardi Gras in New Orleans, Full Moon Parties in Thailand, nor Carnival in Rio. But I can imagine that Amsterdam's Koninginnenacht/Koninginnedag (Queen's Night and the more officially recognized Queen's Day) is right up there.
First, the parties. The night before Queen's Day is loaded with house parties and concerts at various clubs. Things get going at about 7pm Thursday and end around 7am Friday.
Second, the canals. On Day 2 (the official holiday) you'll see hundreds of boats of all sizes, 90% of them complete with a DJ (and sound systems that would put most nightclubs to shame) and multiple beer kegs. People arise anywhere from 11am to 3pm (one friend failed to arise at all, missing the boat that he organized for some 20 people) to head out on these floating nightclubs.
Third, the streets. Each neighborhood and almost every street has a dance party happening right out on the cobblestones. It's mostly house and techno music of the oont-ss oont-ss variety, but with dozens of top DJs the sounds are smooth and the beats infectious. (One of the photos below shows a guy called DJ Dante spinning from his living room - his set was one of the best of the day). And there are pockets where more subtle music exists too (latino, jazz, etc).
Fourth, and most importantly, the people. I've never seen a happier mass of people anywhere. It's essentially a city-wide block party, and Amsterdammers and visitors alike seem to have shed any pent-up surliness that may have built up over a long winter. 700,000 visitors come to the city for the festivities each year.
It really is something to see - literally smiling faces everywhere. Mostly everyone is decked out in orange too, although some people contrasted that with their own shade of green as the day wore on.
Book your ticket and hotel room now for next year... 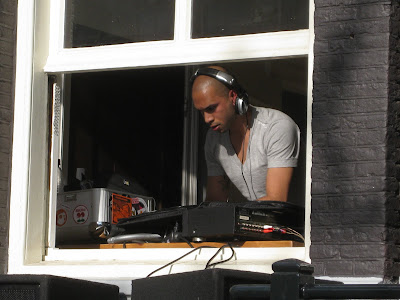 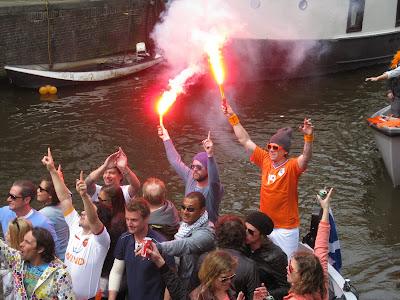 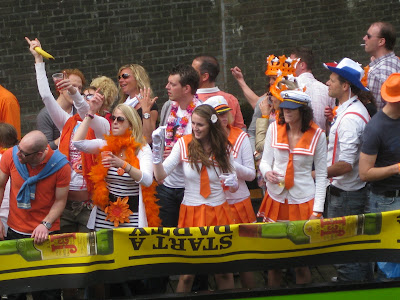 A popular boat with the ladies 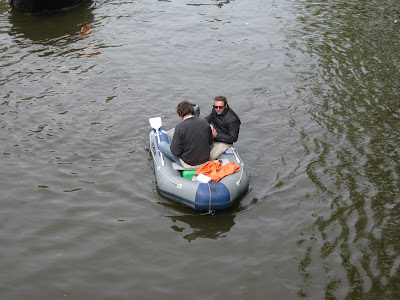 Not a popular boat with the ladies 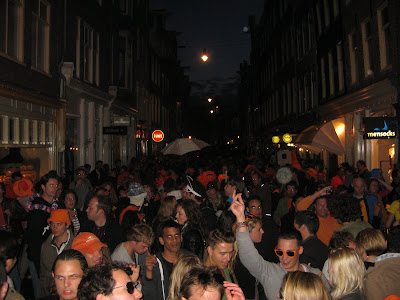 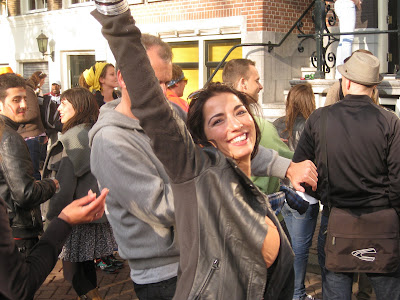 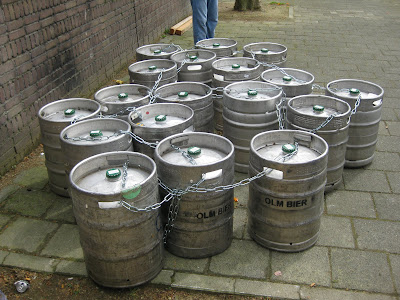 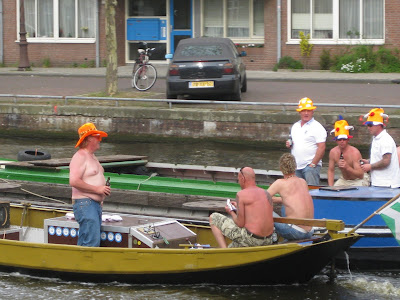 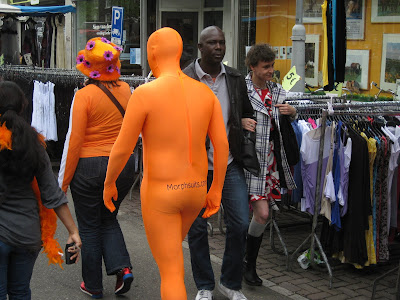 Trust me, the view from the front was worse. Much worse.
Posted by Jeff at 3:06 PM 2 comments 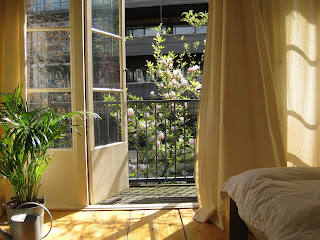 Morning in the apartment
Spring has arrived in much of Europe after what was the coldest and snowiest winter for most of the continent since 1981.
And here in Amsterdam, the city is transformed - people look much happier, or at least much less likely to punch you in the face; trees are greening and plants are blooming every day; speaking of which, the bloomin' idiots are pouring in via the planeload for a weekend of decadence; layers of clothing are being shed with welcome haste (that is, I welcome the haste with which they are being shed); and at every turn, the air is redolent with the smell of some kind of plant or herb, either benign or mind-altering.
I ushered in lente's arrival with a few days spent lounging in Vondelpark with friends, and also headed to nearby Haarlem yesterday to check out the flower-filled floats of Bloemencorso, an annual parade that travels 40 kilometers and features intricate creations made entirely of flowers.
Below, some more pictures of spring - first in Bloemencorso, and the rest in Amsterdam's Vondelpark. (A reminder that you can click on the photos to see a larger version): 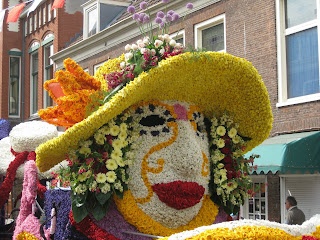 Any guesses what the mouth is comprised of? That's right, two lips. 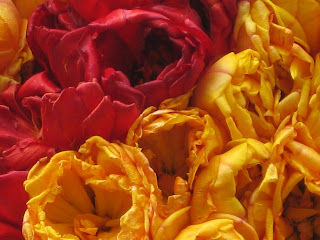 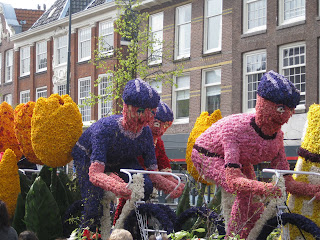 Sadly, this float was disqualified for using performance-enhancing flowers 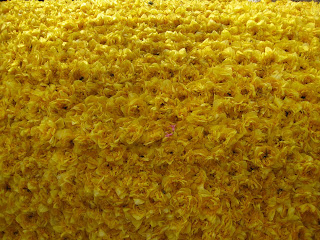 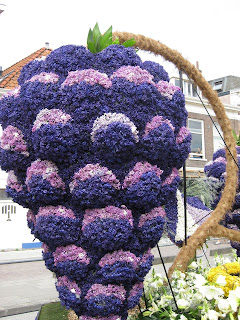 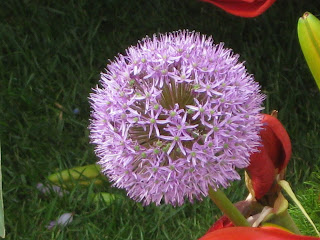 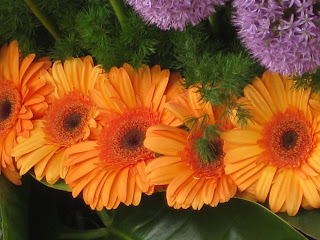 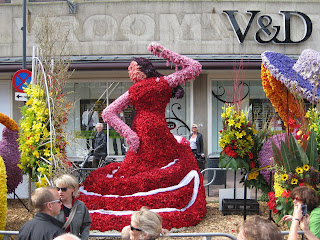 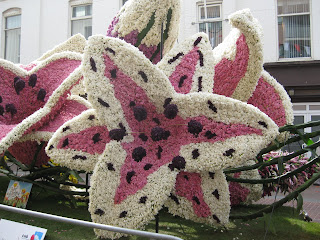 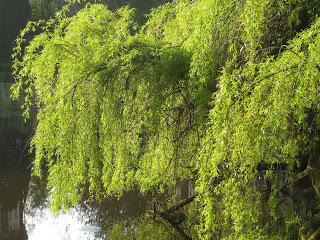 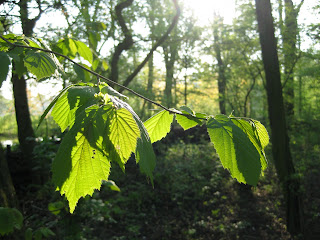 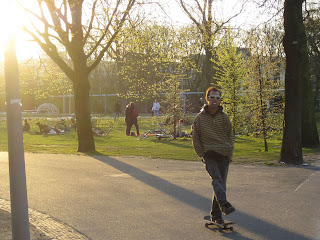 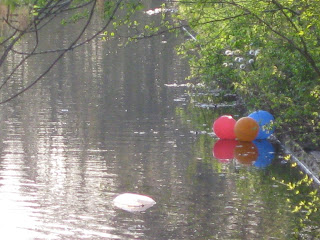 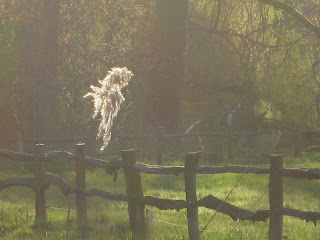 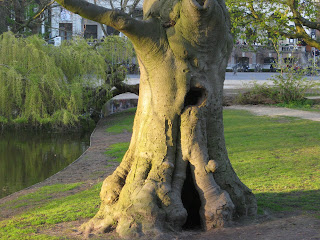