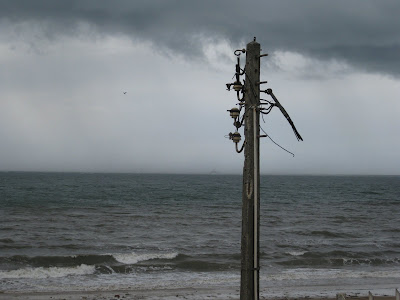 Carcavelos, Portugal - October 2010
Our life consists partly in madness, partly in wisdom; whoever writes about it merely respectfully and by rule leaves more than half of it behind - Montaigne
In other words, in recounting the places and events of the past 12 months on this blog - while they have been fantastic by many measures - I should not over-romanticize things by obscuring the rough patches.
Some stormy skies have rolled in very occasionally, but lately they have become more frequent. Maybe there has been some research done on this phenomenon, but I will call it the Traveler's Wall. Or maybe something catchier, like Expat Excrement.
Culture shock plays a part for sure, as does the loss of all things familiar - your friends, your car, your surroundings, your subscription to Sports Illustrated.
We know this when we travel - after all, we do so specifically to lose those very familiar things for a while and to re-energize. Having this knowledge does make the tough times much easier, especially when considering how lucky most of us are in the big picture. But to not mention the less-than-ideal times seems somewhat dishonest to the people reading this blog.
Some moments have been written about - the short but jarring terror scare in May, the simple acknowledgment of there being days like this.
Others have not been mentioned:
It's all what you focus on of course. I've traded the above for many, many more hours of great experiences and learnings. Plus, each of the above can ultimately be used positively at the same time (who wouldn't enjoy some quiet time to themselves rolling through the Dutch countryside?) or at least laughed at. Humour is a great balm, even if it's hard to find in the exact moment.
But lately, the resilience has worn off a little, the energy has waned, the funny stuff has been more difficult to unearth. Done traveling? No, never. But a post coming soon highlights a few signs that a break from the unfamiliar is due.
Posted by Jeff at 12:01 AM

great insight and honesty shared. A dark day traveling solo is still better than a bright day sitting in rush hour on the No. 1 Hwy Life is all about perspective. Keep on trucken'