While jet-setting (or train-setting) the globe, dating women with foreign names, and eating dessert for breakfast all have undeniable charm, there is a rather unfortunate necessity that is rearing its head of late - work. Or rather, the need for money to gain access to more of the above, which usually involves work.
The self-actualization gurus often advise us to build on our strengths, and not spend so much time trying to shore up our weaknesses. So with 3 languages under my belt and English being the best of them (and giving up on the idea that I'll ever be remotely useful with a power drill or drywall), I am giving translation services a shot.
The Dutch are quite possibly the most skilled non-native English speakers you'll come across. It still amazes me in stores and restaurants just how effortless their English is, particularly those young'uns under 30, who have not only received formal education in the language since the age of 10-11 years old (roughly 3 hours per week), but who have also been raised under a global media culture that is largely English.
Despite this, however, their business materials and websites are still lacking in completely proper English, including humor that is cultural and simply doesn't translate well. Understandable of course (I imagine Bob and Doug Mackenzie or Seinfeld probably wouldn't make a lot of sense here either) - no matter how much education or exposure one gets, if it's not your native language you won't write it perfectly - but it does create an opportunity for, ahem, skilled wordsmiths.
So via a Dutch-Calgary connection, I met with the owner of MagStream, a very interesting company based in the Netherlands. They create and power online publications - newsletters, brochures, magazines. *(Note - if you go to their website prior to Nov.1 or so, the updated "clean" version may not be up yet... lest you mock my editing skills).
They are housed in a large, open-concept space in The Hague (Den Haag here in the native lexicon). Stepping into the building - a large converted tobacco factory called Caballero Fabriek - is a little like stepping into the future. If you've ever walked into an Apple store, the feeling is somewhat similar (although you feel less broke after walking out). 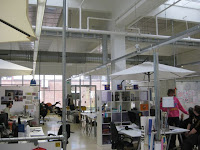 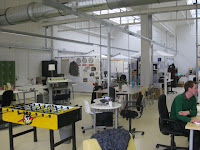 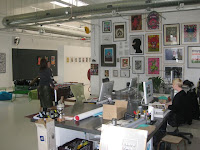 The offices of design firm/gallery "Trapped in Suburbia" 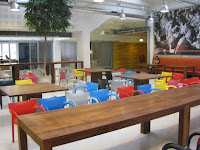 The central lunch area, shared by all companies in Caballero Fabriek
The overall building houses over 50 companies, largely design, web, and creative small businesses. Some of the tenants refer to it as the Dutch "Silicon Valley".
Despite being the only dork who brought a camera to work... a workday spent speaking with the owner, putting my marketing and English skills to work and providing some suggestions and an overall website clean-up all meant for (cue angelic sound of "ahhh") billing in Euros.
After being, to put it delicately, bent over by various overpriced taxis, train rides, hotels, and bars, it is very nice to make even a small entry in the positive side of ledger. I will expand upon just how expensive Europe is in a future entry. Not news to many of you, I'm sure - but there is still sticker shock even when you are expecting it.
Another interesting and very appealing aspect to Dutch society - when taking the train home at the end of the day, the businesswoman across from me was enjoying a beer. Not from a paper bag either - complete with small plastic glass and mini-table bolted just below the window. This may not raise eyebrows on this side of the pond, I realize. But a capital idea that North American society needs to adopt.
Posted by Jeff at 12:51 PM 0 comments

Today marks the one-month anniversary of my departure from Calgary, in search of a new adventure, a new beginning, and ultimately a new home. I am also in search of a new gym.
A month of living (quite happily, I hasten to add) on restaurant food and occasional home-cooking with various relatives, interspersed with about 4 half-baked workouts and approximately 3 vegetables, has taken its toll. As I type the big words, I can feel the love handles moving ever so slightly.
New York started out the adipose assault. With the classic American truck stops followed by all of NYC's assortment of restaurant and roadside choices, the game was over early in the first period. I knew it was trouble at our first roadside stop, when the vending machine happily ate my dollar, I punched D3, and the pizza-flavored Combos slid from their coiled prison down to the tray below. 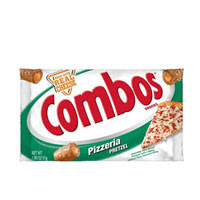 I find the above "Real Cheese" claim highly dubious.
From that point on, with places like Stanton Social House and Bar Carrera (the latter - a wine/tapas bar - was an accident - we were starving after walking around for a hours looking for a place that had room), there was no looking back. Both spots were really cool and the food was excellent. Both were lively, filled with good music and good-looking people. Carrera was really affordable as well.
Paris, as anyone knows, is made for eating. Although it helps to have a local show you around as they do have a number of places that cater to tourists and are not necessarily the best quality.
Where the city catches you is in the small patisseries and boulangeries on every corner (mentioned in an earlier post). One of the deadliest was literally right next door to my apartment, where I was defenceless against the Viennoiserie aux Amandes (or in English, "crack"). An almond-paste-filled Danish, essentially. And having one of these, sometimes two, per day is simultaneously totally recommended and totally not recommended. 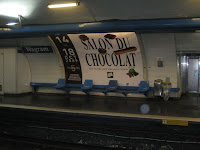 Metro stations advertising full-on, 4-day exhibitions devoted to chocolate
And here in Amsterdam, cheese and bread and cheese are staples of the diet. With occasional extra cheese.
Of course, virtually every meal is accompanied by wine in Paris (cheap and very good quality bottles can be had for 4-8 Euros), and beer in Holland (A glass of Amstel Bock, a new favorite, can be had for 2.50 Euros). I suspect this is not helping either.
The good news? I joined a gym yesterday here in Amsterdam just three minutes from home - Your Fitness Centre
The better news? Here at my local Coffee & Company, three feet away, behind the glass, I see My Chocolate Brownie.
Posted by Jeff at 11:16 AM 0 comments

Back after the aforementioned 3-day retreat to the Auvergne region and La Platriere, I found myself delaying my trip to Holland by a few days. This was mostly forced, as the Internet connection was severed by French workers digging up cable, thus making the much-needed Amsterdam train booking impossible for a few days. And I was informed by my hosts that this type of "work" - break it and then repair it slowly - is a pretty common ploy among the French blue-collar crowd.
But Paris has become increasingly tough to leave at any rate - I'm guessing the Eiffel Tower could double as the world's largest magnet.
Staying for 2 nights at the Best Western Mercedes (not nearly as tacky as it sounds - it was in a very French-ish building and came complete with the authentic shoebox-sized elevator), I spent most of the weekend in Parc Monceau and Montmartre, with a short time spent on the Champs Elysees.
Parc Monceau is in a much less touristy part of town - a solid 10-minute walk to the Champs Elysees. Here you'll see tons of locals, of all ages and with or without kids, just lounging in the grass or on the many benches places throughout. It also serves as a good example of another of Paris' great features - despite non-stop hustle and plenty of concrete, there is always a bench, a chair, or a square of grass to call your own. 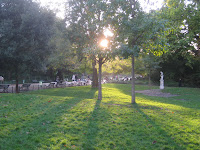 Parc Monceau, above and below 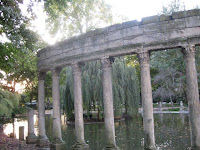 The Champs Elysees is pretty much a massive collection of retail shops and a few restaurants, and really is only worthwhile for the die-hard tourist.
The quintessentially French village of Montmartre, despite being overrun with tourists, is a much more interesting place to spend the afternoon. We were there on a Sunday afternoon, and stopped by huge pots of hearty foods, artists doing potraits (some of them amazing, some less so) of passerby, and cafes and restaurants. 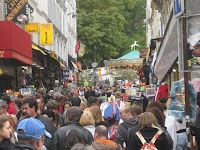 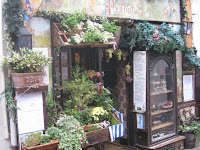 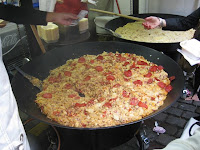 Chorizo sausage, potatoes, and other stuff - 5 Euros gets you a pretty good portion 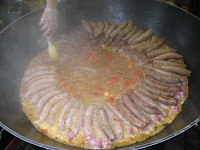 I never sausage a dish as this
We saw people dancing in the street, Picasso's home, heard a jazz band with the world's oldest drummer, and witnessed a crazy lady belting out tunes, complete with a mechanical music box and a mechanical monkey. 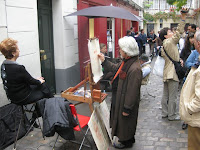 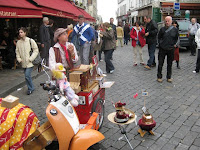 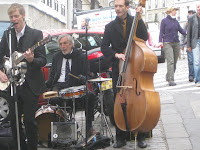 The only drummer who keeps the beat with his pacemaker
If you can withstand the hordes (Sunday - the day of the above photos - is apparently the busiest) and make the climb up towards Sacre-Coeur, Montmartre is a must-see.
Posted by Jeff at 9:10 PM 0 comments

A few Tuesday nights ago it was off for a taste of Parisian nightlife. Now, many of the guidebooks for Paris talk about the odd contrast between the bustling cafe "joie de vivre" and its relatively stale late-night bar scene. And I can confirm that this is pretty much spot on. Ask any of your cafe neighbors what there is to do or what places are worth checking out post-dinner, and they are hard-pressed to come up with an answer.
Undaunted, and taking my own advice, I returned to a favorite place from a previous visit to Buddha Bar.

With 12 locations around the globe in places like London, Dubai, and New York, Buddha Bar is a marketing phenomenon as much as it is a really cool restaurant and lounge. Visitors can buy t-shirts and other branded gear at the front entrance, and their musical collection now sits at over 10 CDs. It's all a variation on the same theme - chillout/lounge music that speaks of exotic locations and hushed conversations.
Stepping into Buddha Bar Paris at about midnight on a Tuesday, one of those conversations may well have included the not-so-hushed phrase "29 Euros for 2 drinks?!?" Yes, it's that absurd - $45 Canadian dollars for a glass of red wine and a Ketel One vodka and lime. It's a neat marketing ploy actually - you need to drink more to ease the pain of what you are spending. It also explains the high degree of well-dressed sugar daddies and their much younger companions sprinkled around the place.
The setting and the music are tough to beat though, so you tell yourself that so long as you don't go every night (or every month), it's totally worth it. And it is. This is an absolutely cool place - perfect music (selon moi), perfect lighting, and a large restaurant below ringed by a lounge up top, with all kinds of dark corners to carry on those hushed conversations.
I can recall a dozen or so times in my travels throughout the years where I've suppressed the practical, rational money-saver in me with a full-throated "When am I going to be here again?"
And it has never failed me - the memories are almost always worth the gouging. And on those occasions when I've let frugality win the day, I've always regretted it afterwards (sitting in the nosebleeds at a Phoenix Suns game still smarts).
Posted by Jeff at 8:30 PM 0 comments