Well, Monday's day of culture was a total write-off - as mentioned earlier, the Musee D'Orsay was closed (this Interweb thing really could have been a time-saver, had I checked first). Then, my arrival at 6:00pm at the Centre Pompidou was met by police tape. And not the artistic kind - very unfortunately, someone decided to take their own life from the roof of the building late that afternoon and it was of course closed for the day.
Resetting things for Tuesday, the Musee D'Orsay was back on the agenda. Perfect timing, actually, as it was the first full day of rain since my arrival in Paris.
One note for eventual travellers to Paris: the Louvre is closed on Tuesdays, which may account for the massive line-up to get into Musee D'Orsay. We waited close to 45 minutes to get in - not bad during peak season, but there are probably better days of the week to choose in order to take in the impressionist art at D'Orsay.
Once inside, the museum left, well, quite the impression.
It is just fantastic to see what talented people can do - even if you're not a typical art fan, this place will not disappoint.
I will let the photos of the amazing art speak for themselves (mostly - I may interrupt at some point). More photos will appear shortly on a new post as well. Be sure to click on each photo to view a larger version. 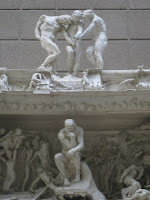 Poor Timmy was often the subject of locker room ridicule 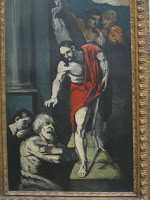 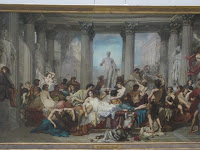 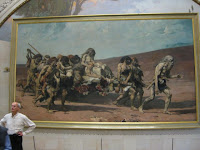 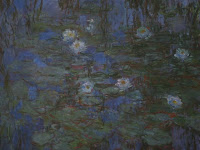 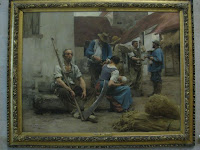 ...in that I needed to.
Saturday was another really good one - this time directly to the Eiffel Tower. Running west on the pedestrian path alongside the Seine, first past Notre Dame cathedral again, the tower itself only appears in glimpses between buildings occasionally - until it appears consistently as a great motivator to keep running.
37 minutes is how long it took from the apartment in Le Marais, accompanied by the soundtrack of "I'm Running" by Misstress Barbara and Sam Roberts, "Sky and Sand" by Paul Kalkbrenner, "Weighty Ghost" by Wintersleep, and "Notion" by Kings of Leon... pretty good company I must say.
It's quite something to run under and around the tower - although we've seen it thousands of times in pictures, it still has a pretty goosebump-inspiring effect.
Today's run was altogether different - same soundtrack, different locale - as I am at La Platriere, a Chambre d'Hote (Bed and Breakfast) in the Auvergne region of France. 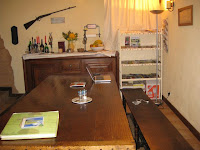 A nice place to be writing from
It is about two and a half hours south of Paris via train. The train ride itself is a great way to go - from the modern and yet classic Gare de Lyon, it takes you a pretty high speed through picturesque towns like Nevers (and of course, on the way back, Nevers again...). 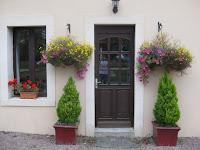 The main doorway at La Platriere
The morning was incredible - La Platriere is on a slightly elevated parcel of land, and the valley below was a mix of clouds, just-changing-colour trees and early-morning sunlight. At 8:30am, with the temperature about 14 and humid, I hit the wet street (it rained overnight) and then veered left soon after onto a tractor path. 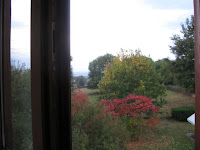 The view from the "Crow's Nest" bedroom
It's all farmland here, with buildings and huge lots from around the 1700's in some cases. Thinking back even further, I imagined it's largely unchanged from medieval times. As I ran through basically a tunnel of oak trees, I could totally picture turning a corner and being stopped at sword-point by an angry knight on horseback, who, upon recognizing the coat of arms emblazoned on my chest, would say "What doth thou runneth from, Monsieur Nike?"
Blame it on runner's high.
In any event, this is a very nice place to unwind after the hectic pace of NYC and Paris. It is run by a British couple named Andy and Jackie, and they do a great job with home-cooked meals (Beef Bourgignon last night) and a very clean, relaxing set of rooms. I even managed to lie diagonally on a huge bed for the first time since leaving home, just because I could. 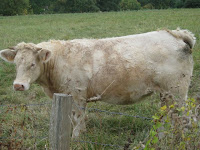 Funny - I got the same look from most waiters in Paris 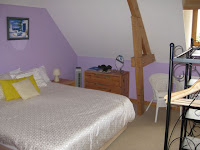 The Crow's Nest bedroom
Posted by Jeff at 2:57 PM 3 comments

Ok, if you'd really like to get in the mood for this next post... head to iTunes Radio, select "International" and then "Chanteurs.org" - it will be fitting music for the trip. This city has is quirks, like anywhere, but it really does get into your heart.
Moi-meme, I am this close to buying a Vespa, a pack of Marlboro Lights, and letting my dog relieve himself without picking up after him.
Now there is normally a negative connotation to any kind of cliche, but in this case all the cliches are authentic and they just work. 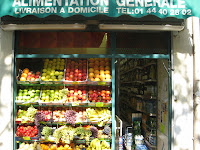 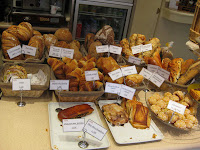 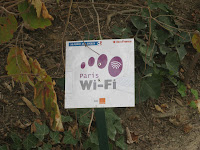 There will be a few problems, as with any big city - and it's not all sunshine and croissants, to be sure.
But most of this place makes absolute sense and provides many ways to enjoy day-to-day life, at least from a part-time visitor's perspective.
Posted by Jeff at 4:42 PM 0 comments 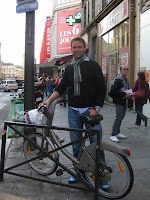 Moi, je fais le Velib.
Yes, it appears that I am becoming a baguette-eating, scarf-wearing, wine-sucking dandy. And yet each of the above has provided me some pretty good street cred - I no longer get the looks from store employees and occasional passerby that reek of contempt, pity and disdain. I'm now down to just disdain. (Although chicks dig the scarf).
Now allow me to introduce you to Velib. I Velibbed for my first time Saturday, and the system was very gentle with me.
Velib - part "velo" (cycle), and I'm guessing part "liberte" (liberty) is Paris' very successful bike-sharing program.
Essentially, at every 300 metres throughout the city a range of sturdy, if unsexy, 3-speed bicycles are locked up and ready for riding. You set up an account, either online or right there at the location you happen to be, in what is a very short two-minute process (unless people are waiting behind you, in which case it will take you 17 minutes).
You punch in the code given to you by the system, your pin, and the slot number of the bike you want, and you are off to the races on Paris' very bike-friendly (no joke) streets.
You can have a 1-day, 7-day, or annual pass. The 1-day pass is only 1 Euro and the 7-day only 5 Euros - all with the first half hour of each "ride" (the time between when you take it and then return it) for free, with a small fee for each half hour after that. Locals and tourists alike use it all the time.
The other best way to get around Paris other than by foot is by Metro. It has to be, in my limited experience, the best subway system in the world. I've rarely waited more than 3 minutes at any stop, and with one or at most two transfers, you can get to anywhere within the city. And it is exceptionally easy to use.
If you're like me and actually get excited by just looking at a metro map and contemplating all the possibilities, you too have a problem. 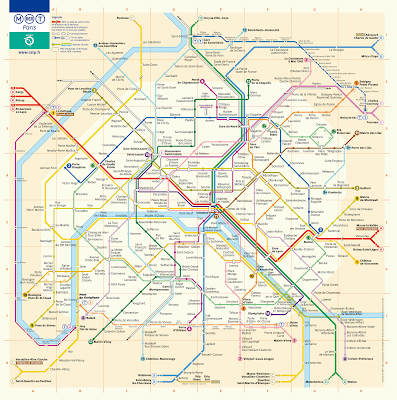 Due to weather conditions being ridiculously good - low 20's, mostly sunny or high cloud, I have yet to venture indoors to one of Paris' dozens of museums.
BUT as today it rains, I do have plans to attend Musee D'Orsay, the home of many works by Monet, Degas, Cezanne, Renoir, and a number of others who sound impressive but whom I really don't know a thing about (yet).
**Update** - just returned from a fruitless trip to the Musee D'Orsay - apparently Orsay is the French word for "closed Mondays". Eh bien. Time for a little rest.
And, to top off this cultural smorgasord, in the evening I have a private tour with an employee of this place - le Centre Pompidou at 6:00pm Monday. Le Centre Pompidou is a huge museum of contemporary art, as well as other rare works and photos - including the latest rarity to hit Parisian streets, "Jogger Before 10am".
Maintenant, some weekend photos and activities to catch up on.
Friday was a complete day of wandering, by design (or lack thereof), to an area called Montparnasse. It was an amazing stroll, with lively, bustling streets like Rue Daguerre and Rue des Mouffetards (not to be confused with Rue des Muffintops, which I seem to be walking down further everyday on a steady diet of almond croissants, beer, cheese, and very little exercise).
This area also includes the Cimitiere du Montparnasse.
Now walking through a cemetery where no one personally known to the walker lies in rest may not be one's idea of good holiday times... however the peace and beauty of the place quickly grabs you and it seems perfectly normal to be there once you walk down the various avenues. Yes, avenues - the place is that big.
And it seems that the French do everything very tastefully and artfully, including honoring their dead.
Some of the tombstones/gravesites were amazing, as seen below. At first I was leery about taking photos, but there is actually a guide map on site advising people where to go (Simone de Beauvoir and other writers are buried here). 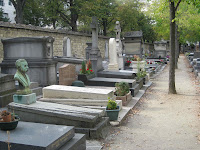 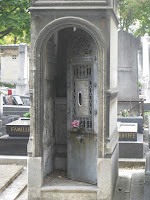 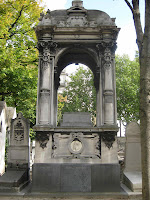 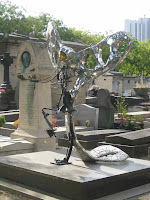 This one said, in French, "To my friend Jean-Jacques, a bird who flew away too soon" When I go, it would be great to have a tombstone half as cool.
So while I first thought walking through here would be a grave mistake, it turned out to be a very nice experience in the end...
Below some additonal random photos from the day in Montparnasse: 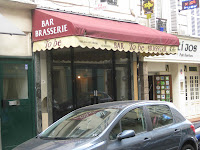 This was one of the few restaurants in the entire city that had gone out of business. Alas, it was in fact, not to be. 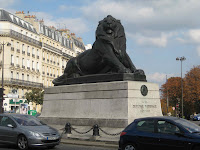 Just a very imposing statue in a large intersection in Montparnasse 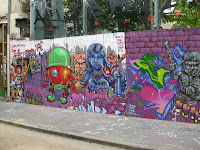 This was outside a museum, where the current exhibit was devoted to graffiti - this wall and others like it were purposely tagged.
More entries coming soon...
Posted by Jeff at 10:06 PM 0 comments