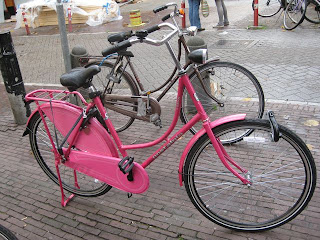 Not mine
In terms of commenting on the remarkable bicycle phenomenon here, I think I have been able to hold out longer than most people when first arriving in the Netherlands. I didn't want to sound trite - Amsterdam, and Holland as a whole, is way more than red lights and bikes.
But with an estimated 700,000 bikes in this city of about 740,000 people, to not say anything about it would be a little strange. The stats say Amsterdam citizens use their "fiets" even more than their car - using them .87 times per day, compared to .84 times per day where they use the four-wheeled mode of transportation. Environmentally-speaking, this is no small fiets.
I'll save the red-light stuff for later - maybe never - and just speak of the spokes. (The Dutch even have an expression that marries the two: "Op een oude fiets moet je leren" - "You need to learn on an old bike." And trust me, there are all kinds of old bikes available in the red light district, with many enthusiastic-looking groups of young, er, cyclists. But I digress.
Biking here is the preferred mode of transport - particularly in Amsterdam, with its narrow streets not suited for large amounts of vehicle traffic. And cyclists come first - as far as I can tell, it's bikes, then scooters, then cars, then pedestrians in the traffic pecking order.
And a word to the wise for my Western Canadian friends who are used to stepping off the sidewalk and having the world screech to a halt for you - doing so here, as in most international cities, will result in you getting brained by a truck's mirror or run over by a scooter. 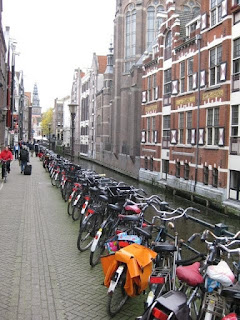 A few more observations from 3 weeks in this wet, windy, and wheeled city:
Posted by Jeff at 12:59 PM

This has been my favorite post so far Jeff (and I read them all)... thanks for the laughs!

I'm sitting here with the girls listening to Jack, waiting to hear your segment...

Your Blog always puts a smile on my face, especially as I'm listening to Bikle Buble!

Yep, I loved this one!