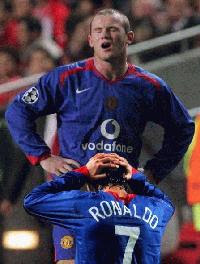 Post-goal celebrations here are waaaay different
Before embarking on this extended trip, I was already curious as to how my brain would react without my usual cultural touchstones to rely upon.
There would be no Daily Show (although the Internet has helped out here), no "24" most likely, no So You Think You Can... ok, maybe I shouldn't make that one public. In general, there would be little to no TV at all, and what there was would be in a language that I can understand, but not at quick conversational speed.
There would also be a whole different ballgame in terms of sports. No golf, no ice hockey, no basketball, no football - at least in terms of the leagues I grew up following. And I can safely say this is the only area that I miss from a cultural standpoint.
Soccer - plain "football" in these parts, although using the term "soccer" does not raise eyebrows nor ire in Holland - is absolutely king here in Europe. It seems to even match or exceed Canadians' love of hockey, which is no small feat.
So I've traded Favre for Fabregas, Sidney for Cisse, and LeBron for le foot.
And having attended my first ever European soccer match Saturday, October 24th, I can say that so far my trades have been one-sided, and not in my favor.
The rain was coming down in a fine mist and the wind was gusting, but about 45,000 raucous fans were not daunted. Some great soccer songs were being belted out every few minutes, each one walking a very fine line between love/passion and malevolence/anger. I'm sure the possibility of violence breaking out at any second is what keeps most fans awake.
It was Feyenoord - the Rotterdam club - versus VVV-Venlo (no idea what the 3 V's mean, although after about the 39th minute, it could have been changed to ZZZ) from south Holland. After a 1-0 Feyenoord win, and maybe, maybe 2 shots on net after 90 minutes, it was time to head home. To be fair, my hosts told me it was in fact one of the worst games they've seen. But wow, that was some kind of boring.*
In search of a fix I scoured the Internet, which revealed a few spots in Amsterdam that broadcast NFL games on Sundays.
Fast forward 30 minutes later, and I'm sitting next to Rob the software salesman from Boston, eating a kangaroo burger in Coco's Outback, an Aussie bar. I went all out and ordered it "Oz" style - with a fried egg, a slice of cheese, and a beetroot.
To recap - a bar, in the Netherlands, run by Aussies, broadcasting American football, while being served by a Hungarian server. With a side of French fries, no less. It is truly enjoyable and it doesn't happen everywhere, that's for sure.
*Disclaimer: I realize there is a complete parallel here; the European visitor to North America would likely be bored stiff watching golf with its snail's pace, American football with all its stoppages, etc. So apologies to my European friends reading this - feel free to equally insult the North American sporting landscape.
P.S. The kangaroo burger? Tastes like chicken.
Posted by Jeff at 2:40 PM

Can't wait until you get your permanent address-make sure you have an extra room Funny. European home base!!

Wow have Rooney and Ronaldo been hanging out with Iginla and Phaneufer???